For this section of my ride, Eugene and I were joined by Sam who is also from Quebec, Canada. This section, 475 Km’s, from San Cristobal de las Casas to Antigua, Guatemala was like the mountain stages of Tour de France; tons of ascents and descents.

From San Cristobal de Las Casas, we left to Comitan; there was a 700 climb and then mostly downhill. At Comitan we stayed with Julia whom we knew through Roberto from Tuxtla. The next day we left to the border town called Ciudad Chautemoc. This was a fairly easy downhill ride except for the 7 Km’s roadworks sections which was worse than a dirt road. Eugene had pumped up his tyres a bit too much since the air was free at the gas station. Half-way through the rough section his back wheel tyre exploded as if he was hit by a drone. We camped at the park right in front of the Mexican immigration office. The talk of the town was the three cyclist camping and using some fancy stoves to cook a meal in the park. We had lots of spectators who would not leave. There was nothing else going on in this town, so we had to put up with this. 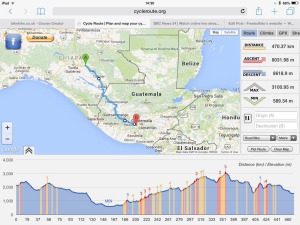 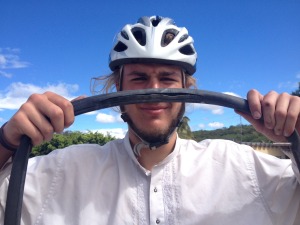 If its free, he will take too much – sometimes it’s not good mate.

The Mexican immigration office was just a building on the side of the road, no barriers or gates, people were just driving up and down; only tourists seem to stop here. The Guatemala immigration office was 3 km from the Mexican immigration office on the top of a steep hill. I never understood the 3 Km’s gap between the immigration offices though. The Guatemalan immigration office was right at the end of a busy market area and no body bothers to check the people crossing this area. However as genuine tourists, we had to be diligent. We got our passports stamped with no questions, almost open border I guess. This day was mostly climbing, through beautiful mountains. The Guatemalan highlands scenery was spectacular, lush green, neck-breaking tall mountains. The road was right next to a river for most of the day. It was like cycling the Alps in France except for the vegetation. We arrived in Huehuetenango, at 445 pm; a long day since we started at 7am. We were quite knackered so we checked into the hotel that the Italian couple suggested. 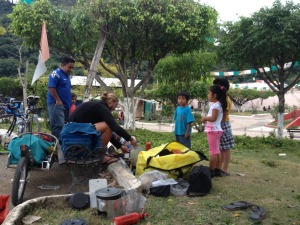 camping in a park at the border town in Mexico. 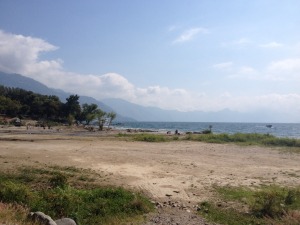 The road from Huehuetenango to San Cristobal Totonicapan was much harder than what we expected. Some of the climbs were so steep that I had to keep pedalling to stay upright. I was glad that I pedalled the whole way, the altitude at the highest point was about 2800metres. We stayed with a Warmshowers host in San Cristobal Totonicapan and I took two days off to recover. 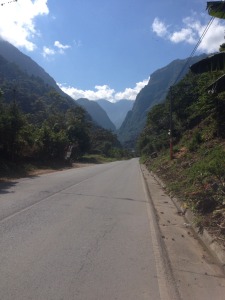 SanCristobal Totonicapan to Panjachel, near Lago Atitlan was only 70kms away but we had to climb 700 metres first thing in the morning reaching the highest point overall in my ride so far at 3100 metres. This day I felt was quite tough and I thought it could not get worse. Actually, it could and it did. We spent a rest day in Lago Atitlan, which was surrounded by high mountains. It was like riding down a cliff to get to this lake and the ride back up was through some steep climbs, some of them 20% grade. For the first time in my ride, I had to push my bike up some of these climbs and at one point Eugene had to help me to push my bike. Also, the road surface was really bad and full of potholes too. It was frustrating to break so hard on the downhill section so much so that the rims of my wheels got heated up. One of the bridges on this road got washed away sometime ago and we had to cross the river by foot – first river crossing in my trip. It took 5 hours to cycle the first 35 Km’s from Lago Atitlan and was almost 1800 metres ascent. We arrived in Antigua much later than we expected. This town was filled with several hostels and is well catered for tourists. Antigua, Guatemala is famous for the colonial architecture, I have seen several towns like this in the last two months though the roads in the centre were different. Here the roads were just some rocks put together. The modern day automobile ride on these roads is so bumpy; even the horses during the colonial times would have found it hard to pull their carts through here. Is there a way to preserve the colonial architecture for modern day usage? 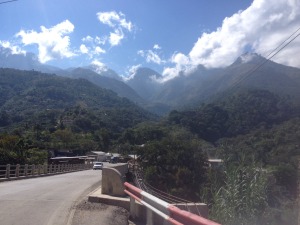 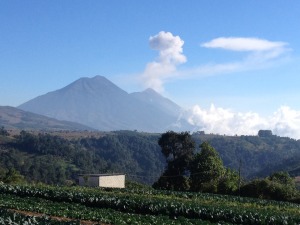 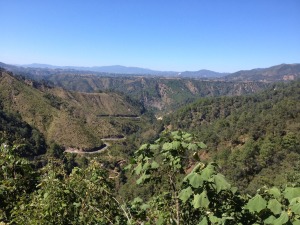 Within 20Km’s of crossing into Guatemala, the name calling started, ‘hola gringos’, which I have read from others blogs, is quite common in Central America. I was surprised that I was also called ‘gringo’ even when though I was miles away from the two Canadians. However the best mark goes to the two boys who could think differently to call me ‘hola negro’. On the subject of name calling, when I was cycling into Comitan, I heard someone running behind me shouting ‘hey buffalo’. It was the Italian-Canadian couple whom I met in oaxaca. They couldn’t remember my name; I was glad to be called buffalo, better than gringos indeed. They were travelling in a scooter, Vespa, that was made in India. An Italian riding a scooter in central america, which was made in India – this might sound dodgy. They seem to enjoy traveling just like me. They have travelled well, almost 35000 kms around the world with that little vehicle. 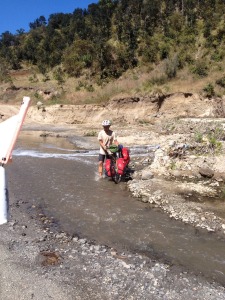