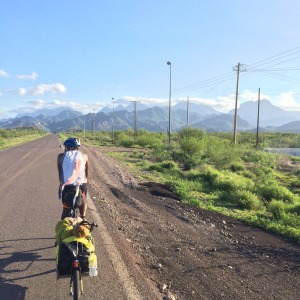 Mission accomplished, that’s how we both felt when we arrived in La Paz, Mexico. It was a tough ride because of the wrong season to cycle, I guess. The heat and hurricanes tested our determination, but we persisted, ignoring some suggestions to skip some parts by taking a bus. We got used to the scenery and it did not impress us anymore. The last few days we cycled merely to get through. When we were cycling in the dark at 5am, I was almost falling asleep in some places, long straight roads were monotonous and boring. Notably, for about 50 Km’s (!) after Ciudad Constitution, the road was just straight as a ruler.

From Guerrero Negro, a total of 9 days of cycling brought us to La Paz where we end our cycling in Baja and will take a ferry to the mainland Mexico (route map updated) 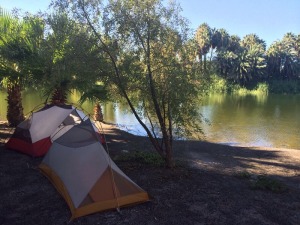 The early morning cycling between 5 and 11am worked well and it was main the reason behind our success I think. After leaving Guerrero Negro we cycled through a dry desert for about 75 Km’s to arrive in Vizcaino, where we met Padre Hugo, who helped us find accommodation for two more nights elsewhere along our route. From Vizcaino we had an easy ride to San Ignacio, an oasis in the desert. It was truly a gift of nature to be able to swim in fresh water in the hot sun. It was not difficult to spend a few hours in the water. 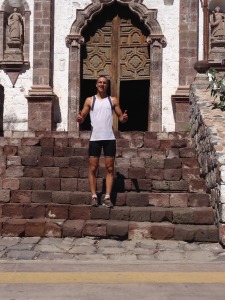 Eugene in front of the mission in San Ignacio

What are the chances of meeting some one, half-way around the world, who grew up just 2 Km’s away. It seems pretty higher than winning Euro Lottery. I met Jeyatha and Vasanth in San Ignacio, who were living in Canada and driving and hiking around in Baja. It was a delight to taste dosa in the desert and that too made using home-made batter. I salute Jeyatha for travelling with this home -made batter all the way from Canada (crossing the US customs!). Eugene and I enjoyed this delicacy and on top of it, they also gave me some home made garam masala for future use.

After leaving San I

gnacio we cycled 75 Km’s to reach the town of Santa Rosalio and then the following day we cycled about 93 Km’s and camped at Coyote beach. There was no time to rest when we arrived here at mid-day, we went straight to the sea to cool down, it was a sweltering 40 plus degrees Celcius. There were few beaches in the neighbourhood and all of them fantastic, except for the heat. On the fifth day we cycled 107 Km’s to Loreto, another sea side town where we had planned to take a day off. We stayed here with Sandra and Eduardo. The break was justified considering five days of cycling in the heat and waking up at 4am everyday.

Little we knew that this break will extend to five days. Hurricane Odile was on its way and I am glad we heeded to the advice of our hosts. The roads had to be cleared before we could continue and so our stay had to be extended. We were lucky to be stranded at Loreto. Sandra and Eduardo took care of us so well and we were soon part of the family. There was no running water (other than the one from the sky), no internet, no cell phone service, no telephone service and no electricity – went back to dark ages almost. The electricity supply was restored but nothing else until we left. The situation was worse elsewhere in places, like La Paz, where military had to be called in to stop people from looting. 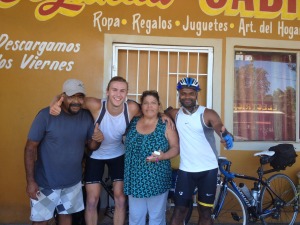 Eduardo, Eugene, Sandra and me 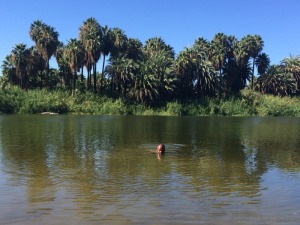 San Ignacio – Oasis in the desert 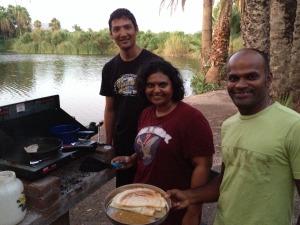 Delicious Dosa by Jayetha and Vasanth

From Loreto it took us four days to reach La Paz, 25 Km’s to Puerte Escundido, followed by 124 Km’s to Ciudad Constitution, 96 Km’s to Los Positas, 112 Km’s to La Paz. We either camped or stayed in the church most of the places. At Santa Rosalia and Los Positas we slept in the premises of the church and at Ciudad Constitution we stayed with the family of Padre Hugo. We camped at Hotel Tripui in Puerto Escundido, Coyote beach near Mulege and San Ignacio. For future travellers who might like a bit of luxury, there were hotels in all the towns 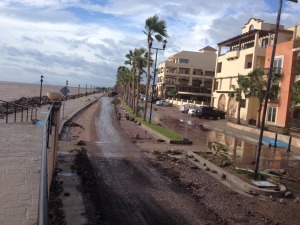 When we arrived in La Paz, some parts still did not have electricity and running water. Hurricane Odile was quite intense here we were told. Luckily, we are staying with a Friend of Eugene’s where we have all amenities 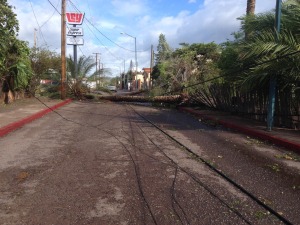 This explains the lack of electricity

. The ferry service has been cancelled until further notice. We are not complaining about this, rather enjoying another extended break. Since leaving San Diego, Eugene and I have cycled 1546 Km’s together and I have a total of 6986 Km’s on my legs so far in this trip. 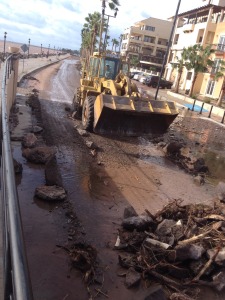 Eugene and I have been cooking curry for dinner almost everyday. I trained Eugene to make egg curry and fish curry and we even made a video of this (video below). I hope this will be useful to some of my friends and hosts who have tasted my curries and wanted to make it for themselves. Please send me an email if you have any questions.

PS: I wish to thank all those who email me or write comments here, it motivates me to keep pedalling. I take note of it all even though I may not have replied to each due to intermittent internet connection.