After arriving in Bellingham I de-toured a bit to visit Vancouver where I met up with Jayakumar from British Columbia Thamil Cultural society whose family cooked a lovely dinner which included more than 10 different varieties – hospitality as described in some Tamil literature. I am grateful for their kindness. 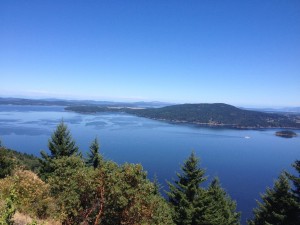 I was talked into visiting some of the islands around this area so I went Island hopping and cycling to reach Seattle after three separate ferry rides and some 400 Km’s cycling over for four days. Vancouver Islands is an excellent holiday destination due to its pristine beaches and lovely hiking trails. I cycled in this islands for two days, the scenery and the weather of which reminded me of cycling in Cape Town. Even though I have seen some of the British Columbia coast line in the BBC documentary ‘The Great Salmon Run’, to see the tall ice capped mountains rising directly above the sea, for real is something different. However, I did not enjoy the cycling part in Vancouver Islands. The road I took was quite busy, the constant whizzing of motors cars was deafening. After two days and about 180 Km’s I arrived in Victoria. From here I took the ferry to the Olympia peninsula in the state of Washington, USA and then crossed to Bainbridge island via a bridge from where I took a ferry again to Seattle, the home of Starbucks whose wifi comes very handy during my travel. 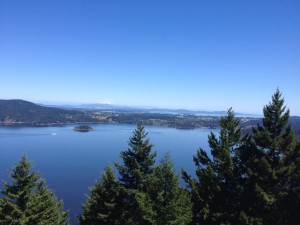 View of Vancouver mainland from the Islands

I stayed in Seattle for three nights and then rode the famous Seattle to Portland cycle route (202 miles). Coincidentally the Seattle to Portland bike ride was happening on the weekend I arrived. Some people do this distance over two days while some brave souls do this in a single day! I am touring not racing so I decided to do it over three days. The route goes through some nice countryside but nothing dramatic.

The heat wave in Washington was the highlight of this part of my trip. I was warned about the rainy and misty weather in Washington but the weather god had different plans for me. I had 30 plus (degree Celsius) every single day ever since I arrived in the lower 48 states. I was very lucky. On the first day when I left Seattle I arrived in the small town of Rainier where I went to have a dip in the river nearby. It felt like a Caribbean holiday to take a dip in the water, after having cycled in the hot sun – life felt very good. However, I did not venture into the river beyond knee deep water, unwilling to challenge my swimming skills, since my legs were too tired for it. 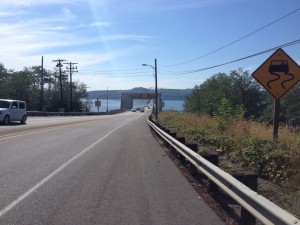 I enjoyed trying to pronounce some of the names of the towns in this region (Sequim, Chimacum, Yelm, Puyallup, Chehalis) named by Native Americans I presume; Puyallup was my favourite. This was a welcome change from the repetitive colonial names such as Dawson, Dalton, York. 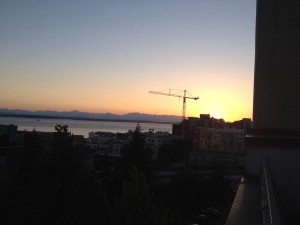 The traffic on these roads (between Seattle and Portland) was not ideal but at least there were lots of cafes and places to eat. I met another cyclist, Ryan Brown on my way to Portland who was going in the opposite direction. The previous night he camped next to Walmart in the town of Lakeview (stealth camping it’s sometimes called as!) I wanted to give this a try. After dark, I put my tent up in the grass pitch next to the parking area behind the hedge. After about an hour I heard a drunk voice. Jeff was surprised to see a tent and wanted to talk to me, I asked him to speak to me in the morning. But he just stayed next to my tent and kept talking, after few minutes I let him continue his soliloquy. As it was getting cold he lied down next to my tent poking his head inside my tent porch. After a while, my tent fly sheet came undone because he was trying to use it to wrap himself to protect from the cold. I ran out of patience and got out of my tent to take the fly sheet away from him. He then ran away. I considered giving him my only jacket but then I didn’t think he was in a state to make use of it. At first I assumed he was a homeless but when I met him face to face I realised he was just drunk and lost his way home! Overall an interesting evening trying to camp next to Walmart. I learnt not to venture into the territory of homeless and drunk next time. 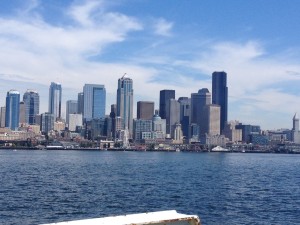 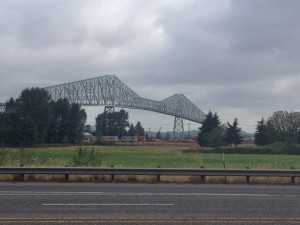 After all the drama, I only slept for 3 hours. I left early morning on the next day to Portland. When I was about 30 miles before Portland I saw a truck pulled over on the shoulder lane. The driver Chris got off the vehicle and waved for me to stop. He asked if I needed money. I was surprised but he took his wallet out to give me some money. I refused. He is aware of bike touring through his son Chris Junior who was also on a bicycle trip somewhere in New Mexico. I took a bottle of Powerade and a mars bar from him instead. Chris came into my life for only less than two minutes but I will always remember him and this incident. I was so shocked by the random act of kindness that I had to stop for few minutes and digest what happened before I could continue, although my brain did not stop the philosophical inquiry for few hours…

I am currently in Portland which is known for its bike friendly roads and excellent quality food. I am loving the food here.

I stayed with several Warmshowers hosts in this part of my trip and my sincere thanks to Mel, Whitney, Zoé and Laura for accommodating me.