The city of La Paz was almost the shape of a bowl, the side wall was about 350 meters in height and was packed with houses. The cable car that runs up and down was the quickest way of getting to the top part called El Alto. Unfortunately bikes can’t be transported in the cable car. So, I chose a steep road, about 3 kilometres, to do this climb to avoid the 15 Km’s busy highway. The gradients were more than 25% in some sections where I expected to push my bike. It took more than 75 minutes to do this climb. I had to stop almost every 50m since the altitude made me gasp for air. I was not embarrassed to ask for some help from people on the side of the road to help push my bike up. It was a mean task. In retrospect it was silly to try push a loaded trailer on this vertical road especially at these altitudes – The worst climb I have ever done. 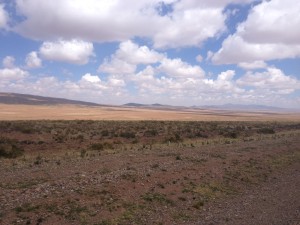 Altiplano was as dry as a bone 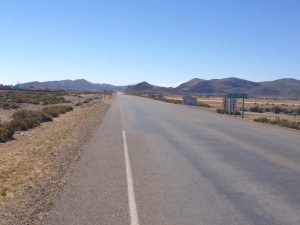 Clear blue skies that come packaged with some strong UV

Once I was at the top at El Alto, the road was flat for the rest of the day. I rode for 96 kms to end the day at a small town called Patacamaya. As long as the sun was out and the wind was calm Bolivian altiplano can be navigated with relative ease. I decided to do some long distances the following two days. It was 126 Km’s to Oruro and the highway had two lanes (two on either side!) and even a shoulder lane. All the exits and entries to the highway were signposted too. This section of the highway would pass the international standards. But there were no cars, absolutely none whatsoever, on the day I rode. I realised later, in Bolivia, roads and shops shut during election day even if it’s provincial elections. I had the entire highway to myself and it was a great ride. After Oruro the highway returned to local standards. Luckily the traffic was very minimal and so the next 120 Km’s ride to Challapata went smooth too. The rhyming names of some of the towns along the way provided for brief entertainment, Sica Sica, Ayo Ayo, Cala Cala, Vila Vila and the best one was Poopo. 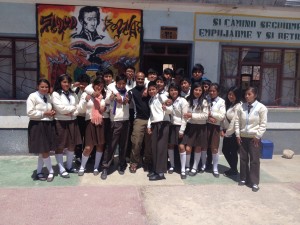 At the school called ‘Educativa Republica Argentina’ in Challapata, Bolivia 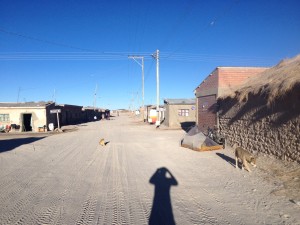 Downtown Colchani at 7am – note my tent on the right

In Challapata I met a local cyclist who gave me the news that I didn’t like to hear – some 20 Km’s after Challapata the road to Uyuni was dirt. The alternative was a long loop around Potosi which would mean staying at higher altitudes for some more days. The sun at this altitude was vicious and burnt the skin badly including the skin over my cheek bones on my face and nose. I realised why people wear hats in these areas. Also, I was getting tired of staying in cold places and that too with no hot showers. I decided to take the train from Challapata to Colchani about 180 Km’s. I had to wait two days for my next train since there were only two trains per week. Challapata had nothing to offer for tourists, just a dusty town in the altiplano. But of course there are always schools! I found a school for my motivational talk which went very well. The children’s desire for economic development was obvious when I showed them photos of my trip from USA and Canada. They were amazed by some of the pictures of Vancouver and Seattle, the big cities with skyscrapers. 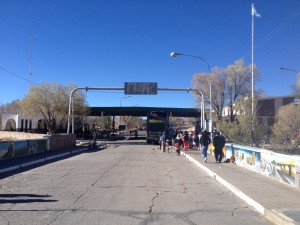 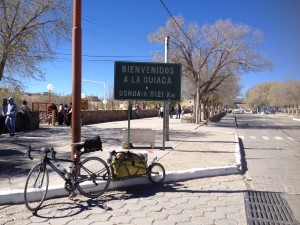 At the Bolivia-Argentina border, only 5000 plus Km’s to go…

The train had a special box for cargo where my bike was thrown into. The ‘popular class’ was the only option for people who board the train at small towns. Indeed it was cheaper but was packed like a cattle truck. I arrived in Colchani at 1.30am after a four hour sleepless journey. I was hoping for a hospedaje (cheaper accommodation) in this town because this town was right at the edge of the Salar – the largest salt plains in the world. I went around this town for an hour looking for the only hospedaje that was not sign posted. It was freezing cold and dogs were barking mad. I gave up after a while and decided to pitch my tent on the side of the road. I tried to kill the next few hours trying to sleep but was not successful. The sun went right through my tent at 6.30am – some warmth at least. I packed up my tent and started riding towards the infamous Salar. The salt plains in Bolivia was world famous and one of the main attractions for touring cyclists in Bolivia. It was in front of me, the vast reserves of salt, the expansive view with the salt meeting the blue sky at the horizon. Internet has lots of photos of people doing all sorts of acrobatics and photoshoot in Salar. Even a random click with a camera phone resulted in some fantastic photos of my bike here. I rode for about 26 km’s over the salt which was just sufficient to experience riding over the salt. From the Salar I rode to Uyuni from where I had to take another train to Villazon, the town at the Bolivia-Argentina border. This overnight train journey went fine and I arrived at the border around 7 am. The border formality took much longer because of a long queue. 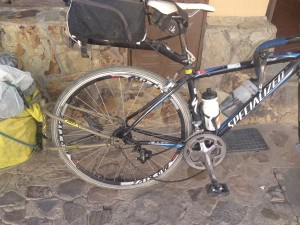 The derailleur that committed suicide 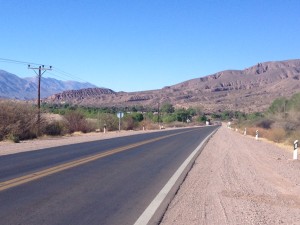 Finally, into some green valleys 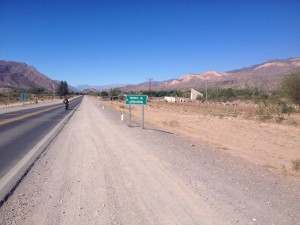 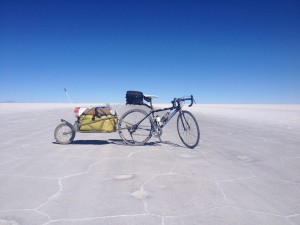 Around 9 am, I crossed the border and started riding in Argentina. The altiplano continued for another 80 Km’s or so. I was excited to be riding in Argentina since I was going to be at much lower altitudes soon and the warm weather that goes with it. After about 8 Km’s I stopped to take a small break. There was nothing to lean my bike against so I had use my kick stand instead. The wind crashed my bike and when I started riding again the chain was not flowing smooth. I changed my gears to diagnose the problem. The derailleur hanger snapped and the derailleur got trapped within the spokes and the bike came to a halt. Even the chain got bent irreversibly.  I had to walk back to the border town to catch a bus to Humahuaca where I found an excellent mechanic to get things sorted. Luckily I had a spare derailleur, the hanger for the same and even a spare chain.

The ride from Humahuaca to Jujuy was mostly downhill from 3000m to about 1200m and about 129 Km’s. The altiplano gave way to valleys with some greenery. It was a welcome change to see some trees and tree-lined streets. Jujuy to Salta was an excellent ride via some curvy narrow roads in the mountains along some lakes. The weather in Salta where I am at the time of this writing is fantastic. I walk around with shorts and sandals even in the night time! 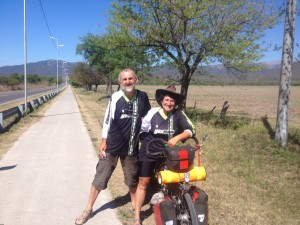 The French couple from Toulouse, whom I met on the road before Salta, who sold their house and business and have been on their bikes for the last four years – very inspirational 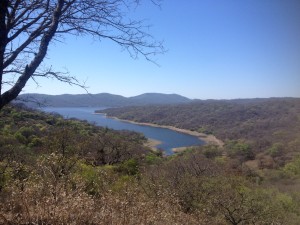 On the route Jujuy to Salta 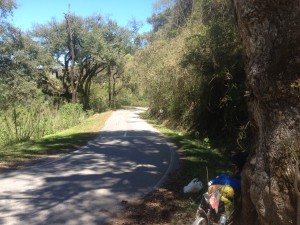