After Guadalajara I detoured a bit to visit Guanajuato and San Miguel Allende, some of the popular tourist destinations in Mexico (route map updated). A total of eight days excluding a rest day at Guanajuato brought me to Mexico city. The whole time I was always above 1500 metres above sea level.The elevation profile says I climbed up to an altitude of 2600 metres at one point. My legs felt the mountainous terrain but there were no switchbacks or cliffs so I didn’t really feel like I was on the mountains. Most of the climbs were gentle but long; I slogged away with lots of patience. I think even a tortoise would get tired after some of those climbs. 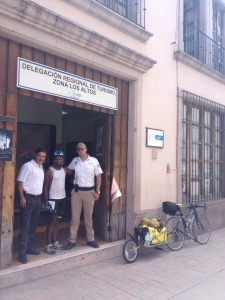 At the tourism office in San Juan de Los Lagos 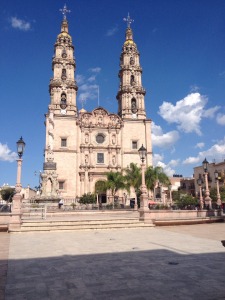 In general there are two types of highways in Mexico, a two lane highway that passes through most towns and its free to use. The second one is referred to as ‘cuota’ which is a toll road that contains a shoulder lane. Cycling on this toll road is not prohibited or at least no body told me to get off; all the toll booths waved me through. Whilst it is relatively safer to ride on these cuota roads because of the shoulder lane, the probability of getting punctures was very high. The shredded truck tyres on the side of the road was a silent killer for my tyres. I had punctures on three of the eight days and both, my bicycle wheel and trailer wheel were equally susceptible. It was eight Km’s to my destination, Tepeji, when I had a puncture on my trailer wheel, but I was too tired to fix it, especially after 130 Km’s. Also, it’s no fun fixing punctures on the side of the highway when it is raining. Instead I decided to continue riding to my destination with a flat wheel, alas, one Km to my destination another puncture, on my rear wheel this time. With two of the three wheels flat, this is not fun anymore. I pushed my bike into the town and checked into a hotel without any second thoughts. Both me and my bike needed a shower to remove all the mud. A night of investigation revealed two punctures on the rear wheel and three punctures on the trailer wheel -I too pay a price for these cuota roads.

The towns in the Central part of Mexico seems to have a common theme, a bit of ‘colonial left overs’ I guess. There is a Cathedral in the centre of the town, stone paved streets and colourful buildings. In addition, Guanajuato town has an interesting networking of tunnels and narrow streets in the centre of the town although the roads were paved with bigger rocks than stones. The narrow streets here was packed with tourist because of international festival called ‘Cervantino’. I decided to take a day off here to enjoy some of the events and it was well worth it. 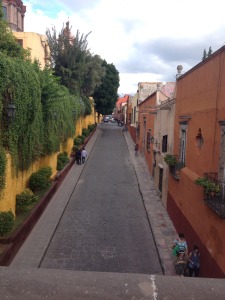 Typical town centre in the central part of Mexico 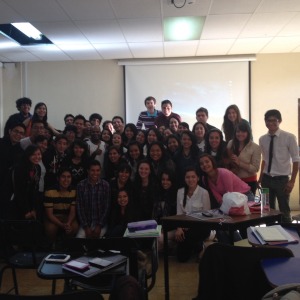 The municipal office in Tepatitlan was pleased to see a cyclists in their town and offered to stay at one of their sports halls. While I was staying

there, a lady was so impressed with my travel story that she wanted to contribute and insisted on accepting a 50 pesos note – all this with my broken spanish. The next day was even more interesting. The tourist police in San Juan de Los Lagos were very curious and happy to see a cyclist and when they were about to take me to a church to find a place to sleep Alfredo from the Delegado the Regional Tourismo office spotted me. Alfredo spoke to a local hotel and booked a free place for me to sleep comfortably. I wish my spanish was better to thank them adequately, but language is not a barrier to acknowledge kindness, I think body language can help.

My Warmshowers host Fernando in Leon was a chemistry teacher at the school called Escuela de Nivel Medio Superior Centro Histórico León in short ‘Prepa Nocturna en Leon’. Fernando gave me an opportunity to talk to his Prepa students (Grade 12/ A levels) for two hours which went above my expectations. 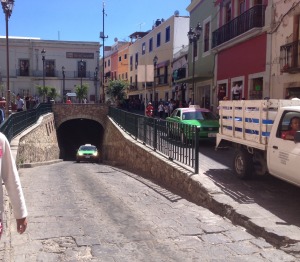 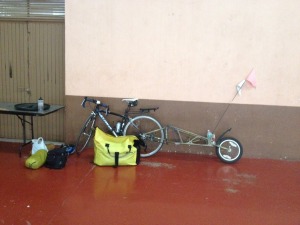 Accommodation at a sports hall in Tepatitlan

The students were thrilled and happy to hear from me. It was a great pleasure to answer all their questions about my trip and also above careers in biotechnology/chemical engineering. I am hoping to give similar talks in some schools in Mexico City too. 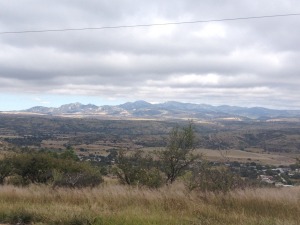 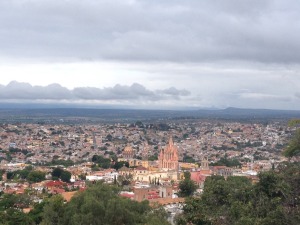 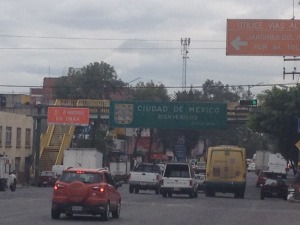 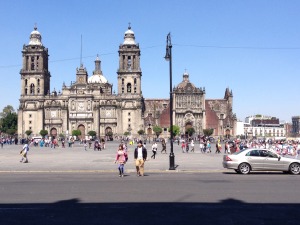 Cycling into Mexico City was an adventure that I don’t wish to repeat. I took the main roads as shown in the Google map, some of them were 7 lanes on either side. I had to hold my breath when crossing some of the exits from these big roads. However, for a city of 20 million people, Mexico City has lot of tree lined streets and parks and cycling within Mexico City is no more difficult than cycling in Central London.

After arriving in Mexico city, I went to the local Hare Krishna (ISKON) temple to find out about Diwali celebrations. I was invited for the Govardan pooja to be followed by free food. It was a Friday evening and I was new to the city and had nothing else to do. I decided to take this offer and what followed was a great evening with tons of excellent free food and good music.

Whilst I was there I could not resist analysing and the following is a summary of my thoughts. There were more than 150 people and most of them dressed in traditional clothes although none of them were from India. Their chants and music were no different if not better, to what I have seen in India. It was interesting to note the extent to which some of the Mexicans have embraced Hare Krishna. I will post a short video of the evening here. Also, I felt there were some similarities to what I might see in a night club. If you watch the video you will note that some of the youth were having great fun just like in a dance club elsewhere. Whilst some might object to this comparison on the grounds of morality, I think, at the biological level, the brain cells are intoxicated in both these situations.

I was pleased that some of the Mexicans have chosen ISKON, certainly for the lovely authentic indian food that they fed me. Thanks to the ISKON centre in Mexico City, I had a great evening and a lovely Diwali.

I am renting a room in an apartment in Mexico city for three weeks just for a change from the ‘nomadic’ life. After three weeks rest here I will continue south and there is at least another 1500 Km’s to ride before I can cross the border of Mexico into Gautemala.