Baja peninsula is known for its vastness and dry conditions. I will include some details of the towns and my route for future travellers. After crossing the border, I spent the first two nights in Rosarito where I made a plan for my ride in the Baja Peninsula. Ensenada was my first stop which is about 80 Km’s away. I spent two nights here with Jorge’s family whose hospitality is some of the best I have received. 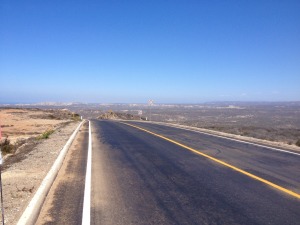 Typical landscape in this part of the world 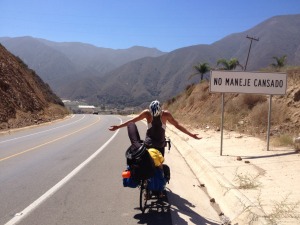 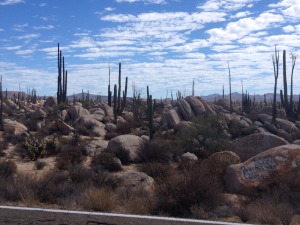 Some cactus near Catavina

The highway 1 in Baja is the only big road for the next 1000 Kilometres. There are no campgrounds for most part and one has to be a bit creative in finding a place to stay. Moreover facilities such as grocery stores are far and few between. 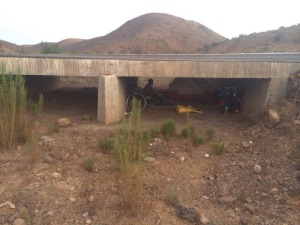 Camping under the bridge 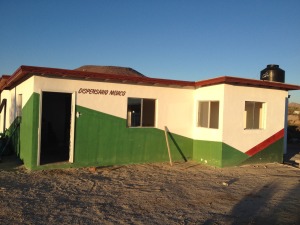 After leaving San Diego I have been cycling with Eugene from Montreal, Canada. 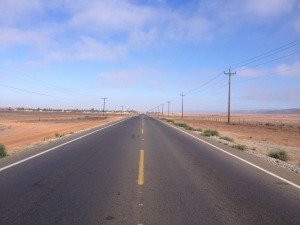 It’s good to have company in a place where I don’t know the language either. However if my Spanish skills are that of a one month old baby Eugene’s is that of a 3 months old baby.

After leaving Ensenada we cycled 6 days to reach Guerrero Negro which is the first town in Baja South when you travel from the north.

The first day we cycled 97 Km’s to San Vicente. There were few hills one was notably high and we tackled this at 1pm, very very hot . We stopped for lunch at St. Tomas which had a swimming pool, grocery store and a campground. 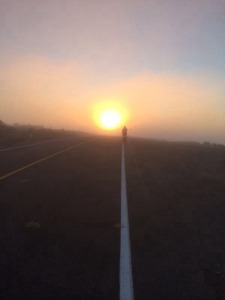 A few kilometres after this town we stopped to have some water melon. This stop was irresistible considering the heat. The lady did not want to charge but I insisted to pay since she was noticeably poor. I was taken back by her generosity considering her economic background. As we were approaching San Vicente a Canadian group of 3 stopped us to give water and 10 dollars (USD) each! Their son had cycled from Argentina to Alaska and they knew all about cycle touring. In San Vicente the Catholic Church in the town offered us a nice place to stay. We experienced so much kindness and all on the same day.

If anything, the previous day experience taught us not to cycle between 1230 and 5 pm, since the heat is blistering to say the least and the hot air only adds to it. The next day the alarm went off at 4am and we started cycling at 5am. This strategy worked; we reached our destination San Quintin at 1130am and we had the rest of the day to just chill. For the following day we had a different strategy. We cycled from 9am to 1230, covering a distance of 60 Km’s and reached the town of Rosario where we stopped for lunch. There was a lovely park where Eugene was playing guitar while I went to the library next door to use their computer. We left Rosario at 6 pm to cycle another 20 Km’s and camped under a bridge (see the picture). The road was quiet and there were no houses for several kilometres on either side, but neither of us could go to sleep until 11pm since this was our first experience of wild camping in Mexico. We were a bit concerned about criminals, animals, and every possible danger I guess. Anyways, we both wanted to try several styles of camping and it’s best done in the company of at least one other person I guess. The next one was a bit interesting.

We woke up under the bridge at 4am again and started pedalling at 5am. The early morning ride has it’s incentives; the view of sun rising from behind the mountains, quieter roads and cooler weather. As we head inland the scenery changed dramatically tall cactus plants was the only vegetation, if any, to be seen here.

When we arrived at Catavina (104 Km’s from the bridge) we went to ask at the police station for camping. One of the officer said we can sleep in the jail since it was empty, that would be a bit desperate! He saw our face and offered us an alternative, to stay in the mini dispensary (clinic) next door. From Catavina we cycled 117 Km’s to the town Puente Prieste where we camped next to a 24 hrs restaurant. The temperature was 35 degree Celsius when we arrived here at 1130, but it felt like 40 plus. The heat must have been so intense for someone who grew up in Madras to complaint. The section between Rosario and Puente Prieste does not have much services and I recommend carrying enough water if cycling this section in summer. There is no shade to hide either so cyclists need to be prepared.

From Puente Prieste we cycled 120 Km’s to the town Guerrero Negro. This section is mostly flat and is meant to be relatively easy compared to the previous days. We arrived in Ville Jesus Maria at 1025 am and this town was just 20 Km’s away from our destination. We were happy, but not for long. When we left this town we had to tackle heavy sand storm (video posted here). At one point I lost balance and the storm threw me off my bike. But no harm done, I continued pedalling. Every passing truck sand blasted us and brought more misery. The sand particles hit my skin like bullets from a machine gun. It took about 2.30 hours to get through this 20 kilometres of flat road. After arriving I learnt that we have been cycling hurricane Norbert! Anything that did not kill me is an experience to remember.