It was getting dark around 6pm in Mexico city, the clock was moved forward and winter was on its way. It was time to hit the road and move to the southern hemisphere as soon as possible; I am determined to miss the winter this year. 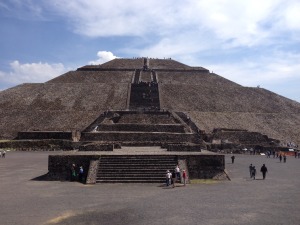 Pyramid of the Sun – Teotihuacan 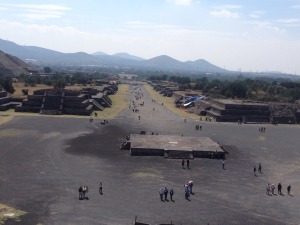 View from the pyramid of the Moon – Teotihuacan

In Mexico City, I went to visit the magnificent archeological site, Teotihuacan, some pictures included here. During my stay in Mexico city, I met Margarita through a Facebook group who helped me to organise two talks for me. Also, during my three weeks stay, I got my bicycle serviced and it was looking nice and shiny and was ready for the road again. I replaced my chain and cassette that were worn out already. Also during my stay in the big city, I made use of the kitchen and cooked basmati rice everyday for three weeks, 5kgs was consumed in less than three weeks, all by myself!

Leaving Mexico city was lot easier than getting into the city, although I left on a Saturday, early morning to avoid the traffic. There was a short climb and then largely downhill so I expected a nice easy ride. After about 50kms my rear wheel tyre went flat. This happened again after another 10 kms on the same wheel. These repeated punctures should have given me a clue but I was a bit ignorant. I kept using the spare tubes I had. All four of my spare inner tubes have a patch at the same spot. I had some stomach problems and was also tired of the punctures, so I wanted to sleep in a comfortable bed. After about 102 Km’s I arrived at my destination in Cuautla where I stayed in a motel. 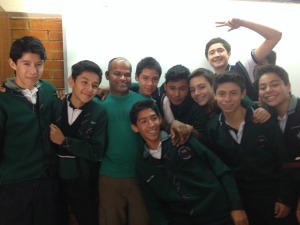 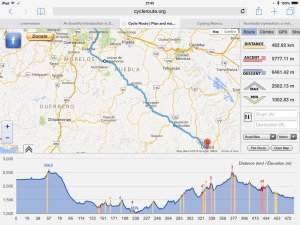 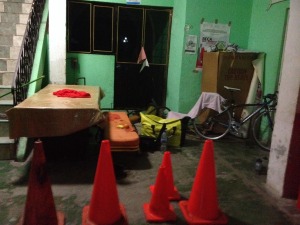 My accommodation at Presidencia in Tehuitzingo

Of the total 5 days of riding from Mexico City to Oaxaca City, about 480 Kms, I had two punctures every day for four days. Only on the third day I found the culprit, a small metal pin that got stuck in the tyre. I had to turn my tyre inside out to find this, but I was glad that I resolved it. But I also learnt that repeated patching at the same spot requires some greater skills, I was not removing the previous patches completely. Also, cutting one patch into two, since I was running out of puncture patches, did not work for me, the cut edges don’t stick very well and they come undone later. It was very frustrating to have two punctures every day – punctures test your persistence and patience. 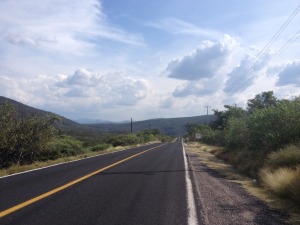 some quiet country side road on the mountains 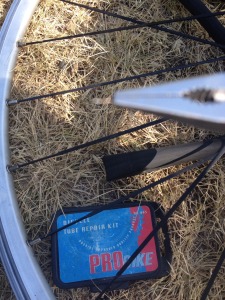 The tiny pin that was giving me grief for three days

After Cuautla, the road was just a two lane road (one on either side) with no shoulder. But it was great fun cycling on these quiet roads, since there were no bigger cities, traffic was low and the mountains reminded of cycling in the Alps. Especially, on the third day between Huajuapan and Ascuncion Nochixtlan, the red colour soil was beautiful. I read somewhere that an earthquake in this region, sometime back, caused great damage, resulting in bald mountains and also turning the soil inside out. There were also plenty of curves and switchbacks, similar to those in the alps.

There were plenty of uphills and downhills and some of them were more than 10% grade: on the third day I had a total ascent of 2000metres and 1800metres on the fourth day. If you like the mountain stages of Tour de France, this section of Mexico is a must. I cycled at least 10 hours each day, except the last day.

Route: Mexico-Cuautla (102Km’s)-Tehuitzingo (110Km’s)-Huajuapan (105Km’s)-Ascuncion Nochixlan (93Km’s)-Oaxaca city (75Km’s). I stayed in hotels in Cuautla and Huajuapan. In Tehuitzingo and Ascunscion Nochixtlan I stayed in the ‘Presidencia’ – municipal buildings which also has the police station. In general the police seem to treat the tourist very well, although, under the current situation in Mexico I would not extend this praise any further. 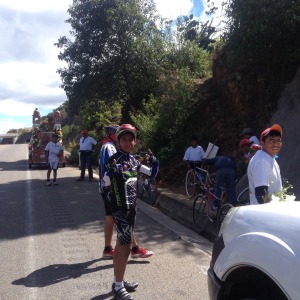 Note the Virgin Mary vehicle which leads them 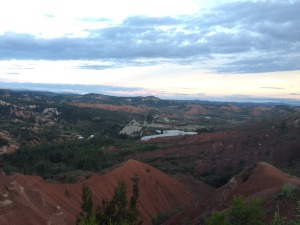 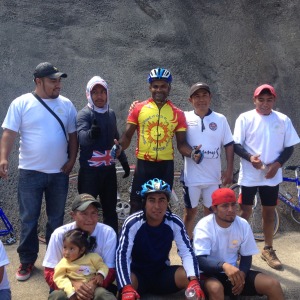 Local cyclists on a prilgrimage

On the fifth day, there were signs of a good day coming quite early on. Near the cafe, when I was about to leave Ascunsion Nochixtlan, I met a teacher who teaches at an institute nearby. He was very happy to have met a cyclist and wanted to contribute. I accepted his kindness and we took some photos. Along the way, I met a group of cyclists on a pilgrimage to a cathedral somewhere along the coast. They had two support vehicles with plenty of drinks and food which they shared with me, it was good fun pedalling with them until Oaxaca city. I was very pleased to have met some local cyclists whose gear reminded me of the second-hand bicycles I had in Cape Town, after all it’s the spirit that matters not the gear. 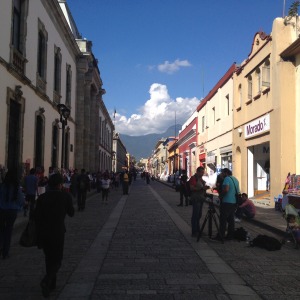 Oaxaca City – this could just as well be an European city

Oaxaca city has a very European feel to it and it’s a popular retirement town; plenty of US expats live here. I am currently staying with an excellent Warmshowers host Zoe, who truly loves to meet travellers. I met some of her american friends and also her couchsurfing guests and cooked a curry for them. It was almost like a youth hostel here, a lovely group of travellers and plenty of stories to exchange. Once again, it is going to be hard to leave this comfort zone… 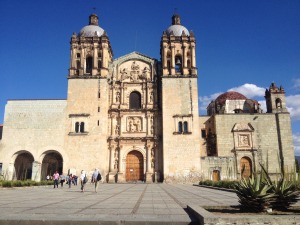 Some typical cathedrals in this area