The end was in sight and the countdown began.

After El Calafate the next bigger place was Puerto Natales in Chile and there was a 70 km ripio (Spanish for gravel roads) section in between. I took the 75 km detour to avoid this even though it meant some potential headwinds when heading west from Esperanza. Early mornings were generally better for winds and also on that particular day it was calm. I timed it well to avoid the headwinds. On the fourth day, after leaving El Calafate, the road towards Puerto Natales had some beautiful views of Torres del Paine, some stunning granite rocks standing tall. I was quite close but did not go into this park because I did not have the time nor the gear to do some proper mountaineering; perhaps another trip sometime in the future. 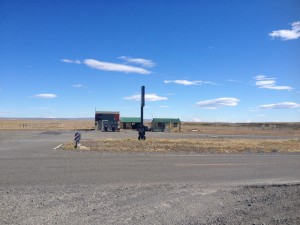 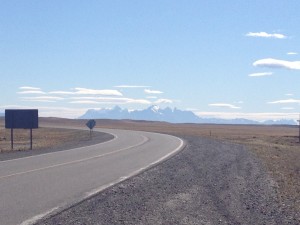 Torres del Paine at a distance

Puerto Natales to Punta Arenas was 240 kms away and I pedalled it over two long days. Technically, Punta Arenas, as most Chileans pointed out to me, was the last big city at the southern end of this continent. Ushuaia which boasted the title of ‘End of the World’ was located on an island, called Tierra del Fuego shared by both, Argentina and Chile. It was a two hour ferry ride to get to this island from Punta Arenas. On arrival at Porvenir, the first small town in this island, a long stretch of approximately 156 kilometres of gravel roads waited for me. I had to ride this section in order to cross another milestone in this trip, twenty five thousand kilometres. It was just for statistical purposes but why not.

Apart from the small estancias (sort of farm houses) there was nothing along this road, just a dry land mass with tons of wind. The more south I got the winds got stronger and stronger. Luckily on this stretch the winds were tailwinds and on the day I chose the gusts were 78 kmph. If it wasn’t for the gravel roads this would have been a piece of cake. The winds threw me around all over the road but generally kept me moving forward. The road surface was not too bad though; a well compacted gravel road except for the last 20 kms closer to the border. I was riding with full warm gear, full pants, beanie underneath my helmet, full gloves, thick socks and a jacket. This was not quite how I imagined this would be. The blustery winds generally did not let the temperature rise during the day. A lonely wind battered tree along the route described who was the boss on this island. 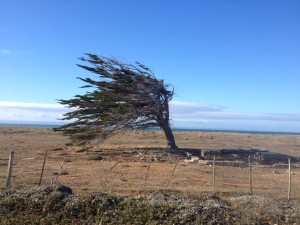 You know who is the boss here 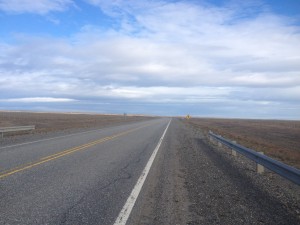 Pampa landscape at its finest 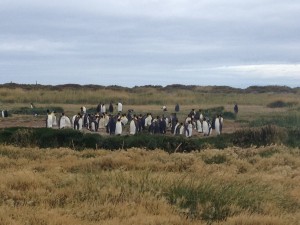 A ‘bunch’ of emperor penguins have migrated to this island some years ago helping to put this place on the tourist map. It was a 12kms detour, one way, and that too on gravel roads. I stored my bicycle in the bus shelter at the junction and hitchhiked to see them. It was not as impressive as I expected though perhaps because of vthe David Attenborough’s documentaries featured these birds on some stunning islands in Antarctica and so this visit was just a tick in the box for me.

After crossing the border at San Sebastián the roads were asphalt once again. I covered the distance of 78 kms to the city called Rio Grande in just under three hours. I felt invincible but once arriving in the city the road direction changed putting me directly in front of the winds which battered me and put me in my place.

After about 50 km from Rio Grande the pampa landscape gave way to some rolling hills and closer towards Tolhuin the landscape took a big change, it was more alpine. However the temperature here stayed in single digit (degrees Celcius) throughout the day. Combine this with the windchill it was barely above freezing temperature and not quite pleasant for someone who prefers tropical climates. The British summer looked a lot more tropical compared to the summer in Tierra del Fuego.

From Tolhuin it was 104 km to Ushuaia but I dragged the end a bit and rode this over two days since accommodation in Ushuaia was way outside my budget. 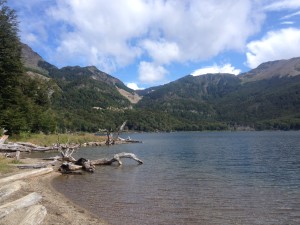 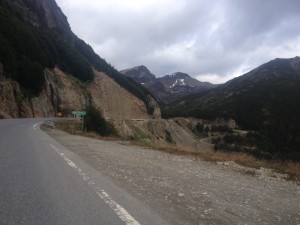 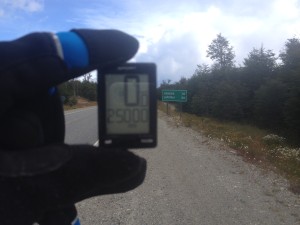 During the last two weeks I was asked by several people whom I met along the route including some cyclists who asked about how I felt about the end that was coming. It only hit me on the penultimate day when I emptied the fuel bottle. There were no more roads to continue south and I started feeling the void; something that kept me busy was gone. It was a bit sad to see the bicycle boxed and being loaded on to the plane in Ushuaia. When the escalator moved the bike box from the luggage trolley and on to the plane’s belly I felt a beast was caged the one that rolled 25,090 km over two continents (After thought: this sentence might sound dramatic but it was exactly how I felt at the time). At the Ushuaia airport waiting room while I was watching this scene unfold, scenes of my life over the last 20 months were playing in my head, a bit of a smile with puffed eyelids at the same time; the sense of success with a tinge of sadness was a bit overwhelming.

The little boy, who grew up in one of the slums of Chennai, only dreamt of a better life at his younger age. Little he knew that Alaska and Ushuaia would beckon him later in his life and that too on a bicycle. The last 20 months and two weeks could not be described simple as bicycle touring, it was something bigger. It was a dream one that was conceived about three years before the start of this journey. The motivations to embark on this journey were several. I wish to write this up and the events that led to this decision in the form of a book since I believe this story will be of interest to some. The enthusiasm from the pupils in the schools and the students at several universities that I spoke to during this trip confirm this.

I am very grateful for life and the opportunities it presented to experience and realise some of my dreams. The dreams that I had when I was young were radically different to the ones that I conceived later in my life. I chose to free myself from the illusion of stability in life, a career, a place to own etc., and seized the freedom to purse some of my dreams that would make me happy. A happiness born from the self without depending on the recognition of others. This unashamedly self indulgent journey was worth taking the risk. Apart from the obvious effects, this trip has freed my mind and has left me with ideas for more adventures in life and I have no doubt that some of the effects of this trip will be latent. When the mind was free life seemed beautiful and the happiness was permanent. 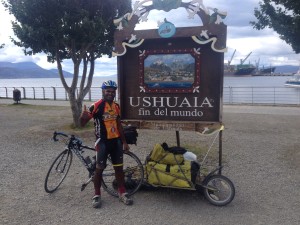 It only took 20 months and two weeks to get here 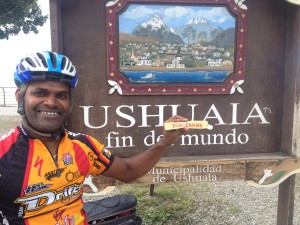 Everything about freedom has been said and there are plenty to quote from. I will chose one that might be a bit obscure but quite pertinent. I watched a documentary once, during my time in South Africa, whose title I forgot (shame on me) but left a strong impact on me. A lesbian woman of colour who was imprisoned during apartheid for some offence and later was working for a NGO at the time of making of the documentary said ‘freedom is in your head’. She felt a lot more ‘free’ inside the prison cell than outside it.