My time in Santiago flew by and I could have easily stayed there longer. It was time to leave because things became too familiar and it was not the time to return to ‘normal’ life. I really liked this place though. 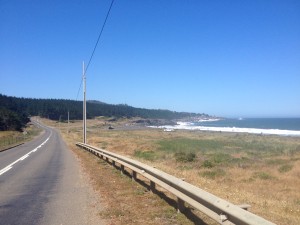 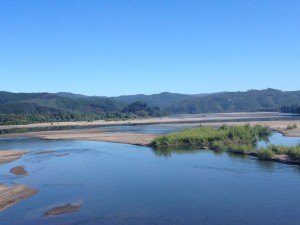 Some rolling hills along the coast of Chile

I had originally planned a six days ride to Concepcion another big city in the south of Chile on the Pacific coast. It was a bit of an underestimation. Even though there were no big mountains the rolling hills landscape, reminiscent of the South West of England, had lots of roller coaster roads. I had to extend my journey by a day to cope up with the hills. The first two days were relatively easy although I was numb to my surroundings since my mind was pre-occupied heavily with the floods in Chennai and my inability to contact my mother for few days. If this floods had happened a few years ago it would have been a devastation for us. For instance one of our neighbours who still owns cattle lost all their animals, 15 of them, to the flood and also their house went under water for few days and they were left with not even change of clothes. My mother had to be rescued and her house was under water too but luckily I am in a position where I can help my mother to recover some of the things she lost. At the time of climate conference It is almost impossible not to link these extreme events to climate change even for a rational scientific minded. It is a pity that science is not sophisticated enough, yet, to find the links or otherwise. Nevertheless I believed it is better to err on the side of caution. With all this in my mind it was hard to ignore the amount of logging I noticed and the annoying extra long trucks that would swerve around me during my ride in the coastal areas of Chile. Without knowing the hard facts judging these as deforestation would be based solely on emotion. For instance we don’t feel the same emotions when we see piles of paper. However my sincere hope was that these trees were chopped with all due considerations for the environment. 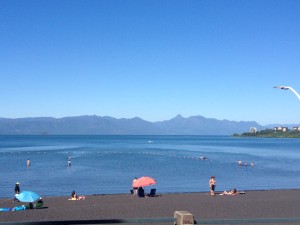 The lake in Villarica 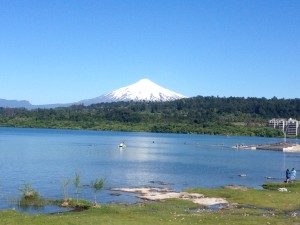 Fire stations in Chile were abundant.Almost every small village had one and they were very friendly. For cyclists a safe place to roll over the mattress was all needed but the bomberos (fire station) in Chile also had hot water for shower and even wifi, at least most of the ones I went did. I was looking forward for my ride on the coast since it had been a long time, ever since I left Colombia, since I cycled along the Pacific coast. When I arrived in Concepcion it was great to see some familiar faces; Deborah and Woody whom I knew from my time in Plymouth hosted me kindly for 5 nights. We had some English tea, curries, some grey skies and even a rainy day. Combine this with the rolling hills landscape and rugged coastline it was almost like being back in Devon for few days. 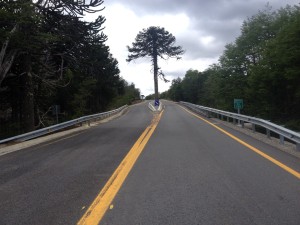 Some consideration for nature 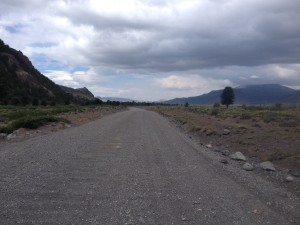 A bumpy ride on the Argentinian side of the border

After Concepcion I wanted to try and avoid the coast because it was too hilly and windy. But the road I took to get back to the Andes mountains was no less difficult. For instance on one of the days the total ascent was about 1200 metres even though my net altitude gain was zero. I would rather climb a mountain than these rolling hills. On top of this I made a silly mistake. Assumption. A yellow line on google maps was not a good enough indicator for pavement. After leaving Nueva Imperial I hit a gravel road. The town where I wanted to go was about 30 kms away. The loose gravel was slippery and I had to be on my feet. There was no way I could have navigated my way from my saddle. The chances of rescue were remote since no vehicles passed by. I was preparing for a really bad day and was even ready to spend the night somewhere on the road. About 10kms into the road there were few houses and one of them was inhabited. I restocked some water and they gave me a good news. The last 10 kms of the road were paved; a slimmer of hope began. Eventually I hit the pavement and I was flying. All the spent up anger I suppose. I still had 60 kms to my planned destination and all of it was on paved roads which was a piece of cake compared to my experience earlier the day. I arrived in Villarica a very famous tourist destination that has some resemblance to lake Geneva. A beautiful mountain line on one side of the lake and an ice covered volcano on the other side. The beach on the lake was teeming with holiday makers on that sunny evening with cooler breeze. It was a fantastic treat for all the hard work earlier the day. 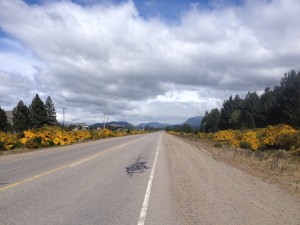 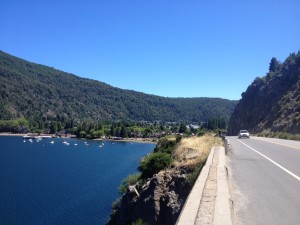 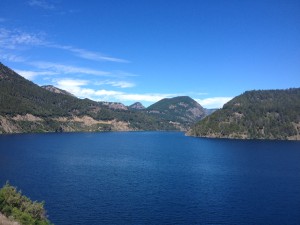 Along the 7 lakes route

After Villarica the road skirted around the lake to Pukon another popular holiday destination after which the traffic died and the road went through some dense forest on the mountains with plenty of waterfalls on the side of the road, all thanks to the glacier on the volcano. I stopped in the last village before the border called Currerihue a lovely small place nested in the mountains with some stunning views. From this village it was 40 kms to the border including 15 kms of climb with some steep sections. The border crossing was just a formal rubber stamping process. Another surprise awaited me at the border, a 14 kms gravel road on the Argentinian side. This time it was a gentle downhill and the winds were on my back. None of these helped. The tyre marks by the passing cars added to the already bumpy ride and the dust wave generated by the passing cars was a nuisance. I managed to stay on my saddle and rolled over the gravel at 8kmph mostly. It was impossible to ride the curves since my front wheel started to slip whenever I tried to turn. It was safer to get off and push the bike instead. After 14 kms I hit the pavement and the next 50 kms I rode at an average of 30 kmph largely thanks to the tailwinds and gentle negative gradient. It was a joy. The dense forest with lots of water on the Chilean side of the Andes was in shark contrast to the drier and more expansive landscape on the Argentinian side. I eventually reached Junin de Los Andes. From here onwards I was on some of the most popular holidays destinations in Argentina: The Lake District. As the name says it was full of lakes surrounded by mountains.

I was invited to spend Christmas with Harry and his family in San Martin de Los Andes. Harry and his wife have pedalled the length of Americas and also Harry had climbed all the 7 summits in each continent. It was great to exchange lots of stories and spend some good time with his family. I really enjoyed the company of their kids Julian and Tommy. The cheeky fella Tommy, who was only just beginning to talk, found it too easy to pronounce my name. It was only one of the handful of words he had learnt so far and I hope he will remember it. 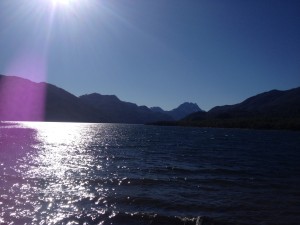 Sunset at the campsite 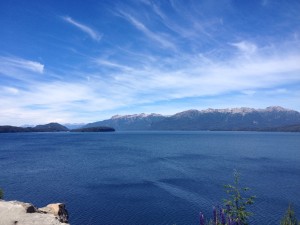 We had curries for Christmas Eve and lots of sweets which went until midnight. I left San Martin de Los on Christmas Day since the weather was great, almost zero traffic and the leaves on the trees were still. A perfect combination for an excellent ride. I rode 50 kms along the famous 7 lakes route and camped next to a lake. I will let some of the photos do the talking about the stunning scenery and clear blue skies I had. Waking up to the views of a big lake with some mountains on its backdrop was not a daily routine and was enjoyed thoroughly too. The ride on the Boxing Day was also on identical conditions and again, yet another wild camping next to a lake. The final day was a relatively easy ride into Bariloche – the ‘queen’ of the Andean lakes district. 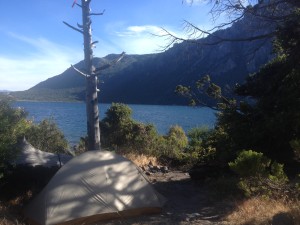