Long flat roads, good weather, good quality food and friendly folks all along – riding in Argentina felt like holiday riding except for the winds. What is life without some challenges anyway.

Cafayate was out of the way but some diversions are allowed especially if it involved a climb, a 3000m pass. On leaving Salta, after about 100 kms, I arrived at a place called Alemania where I camped out under a derelict railway bridge. This was like a classical place out of a horror movie composed of a disused railway station, just five or six houses with broken windows and the inhabitants were like zombies. A toothless fella pointed out the place to camp. The tiny shop opened only at 8pm in the evenings. It felt like a disaster struck this place recently. Nevertheless it was safe. The next day was the ride through a canyon covered in red soil. The tourist site Garganta del Diablo (Devils throat) that was just on the side of the road was a spectacular sedimentary rock formation. Cafayate, known for its vineyards and olives felt like a small town in Western Cape. Then came the 3000m pass to Tucuman which was tackled over two days. It was desert condition on one side of the pass while the other side was a total contrast – rainforest like vegetation and lakes. This road was quieter and almost traffic free. I clocked a 69.5 kmph maximum speed during the downhill (just a bit over the advised maximum speed when puling a trailer). The downhill was about 60 kms long which I split into two days in order to save some for a rainy day and it turned out to be literally just that. It was a wet descent the next day. At least I enjoyed the wild camping, next to the lake, the previous night. The highway to Tucuman was lined with sugarcane plantations and the trucks left an awful lot of debris on the side of the road. 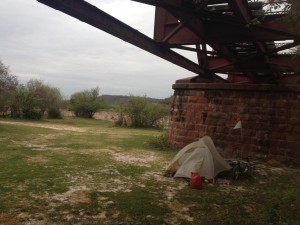 My home for the night at Alemania 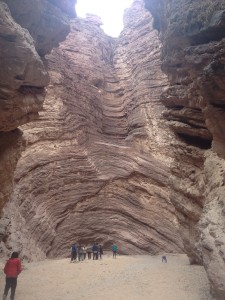 Apart from the one pass described above the rest of the roads I took were generally flat. It was a joy riding on the asphalt except when the wind was absent. Strong winds are a characteristic feature of Patagonia in the southern part of Argentina but at this time of the year even the northern Argentina experienced some strong winds perhaps not to the same extent. However it was sufficient to slow me down and it seems I am not lucky. I had headwinds or crosswinds on at least 5 days compared to tailwind on just one day when I did 67 kms in just two hours. Headwinds on route 40, a famous highway that ran all the way from north to south of Argentina about 5000 kms long, was frustrating especially when the views were monotonous for long stretches of tens of kms. A test for endurance, almost.

After La Rioja it was five days ride to San Juan and a further two days to Mendoza. About 200 kms from La Rioja was the national park Talampaya where dinosaur fossils from Triassic period were found. I camped at this park for a night and went to visit the Talampaya canyon on a bus. Some of the rock art on the canyon walls were well preserved. The canyon has some stellar rock formations carved out by natural forces over millions of years. 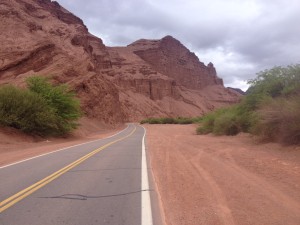 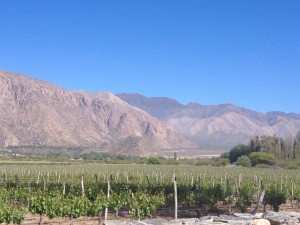 After Talampaya I joined the route 40. Although the mountains on these regions were dry the valleys had some vegetation. The lush green villages were a welcome treat. I camped out in municipal parks in Guandacol and Jachal.

In Talampaya I was reluctant to take the trip on a bus since it was too expensive, about 30 USD. But the desk that was responsible for walking and bicycle tour did not open until 830am (official opening time was 730am) and no one knew any information about the cost or timings either. I have been waiting for this information since my arrival the previous afternoon. I complained at the park office and they let me go on a bus for free. Originally I had planned to stay for two nights in Talampaya but the canyon tour finished at midday and there was not even a tree in that campsite to hide from the blistering heat. So I decided to leave. I had to carry the curry that I had cooked the previous day. On arrival in Guandacol my stove failed since the threading in the nozzle worn out. But I needed to cook some rice. It took some courage to ask a family across the park to cook some rice for me. It was a bit cheeky but worked. In life persistence pays off I think. 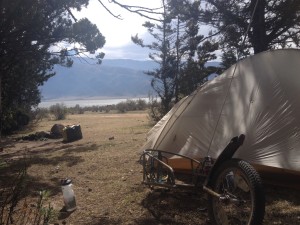 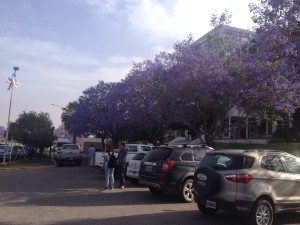 In La Rioja the trees were covered with purple flowers 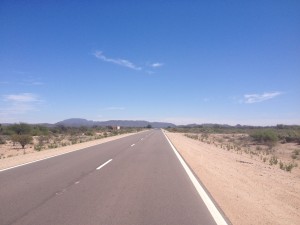 The ride from Jachal to San Juan was 160 kms and I decided to do in one day because there were absolutely no villages or towns in between, just empty land all the way. A puncture was the last thing I needed on a long day but on top of this one of the spokes in the rear wheel snapped which led to a wobbly wheel and I was about 60 kms away from my destination. I managed to adjust the wheel a bit and ride the rest. It was an epic 10 hours journey in total. Mendoza was again 160 kms from San Juan but luckily there was a police check point in between, about half way through, where I camped out for the night.

I have traveled in Argentina three times before but this was the first time on a bicycle. This was a totally different experience and preferred one compare to the previous ones. The interactions with the local people in these remote villages made an awful lot of difference and indeed traveling slowly allows to take in all the brilliant scenery. I loved the food in Argentina. Perhaps the French might be quite proud of their bakeries but the Argentinian bakers rival them quietly. Dulce de leche, empanadas, asado, coffee and maynoliva are some others that I enjoyed. The best of all, I have acquired a taste for meat after trying some homemade Argentinian asado (barbecue). Although I think prime minister Narendra Modi may not be happy that I had been eating cows! 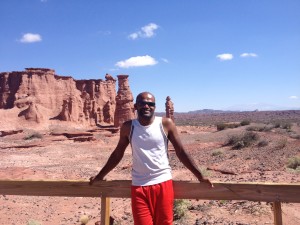 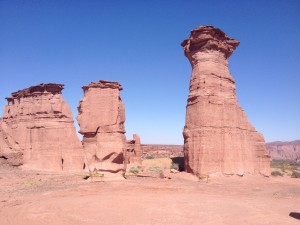 The result of natural forces working over millions of years

The highlights of this section were the hosts that I stayed with along this route and the number of people I met. In Catamarca I stayed with Mica and Max my Warmshowers hosts. In La Rioja and San Juan I stayed with Couchsurfing hosts Mati and Facu respectively. In all these places I stayed with their families and every time I had some lovely food. These families received me with great warmth and looked after me like their own. I got sucked into the Argentina tradition with relative ease and also my Spanish skills have increased enormously. Esteban, a biotechnology scientist from Tucuman University took me out for a coffee along with his family and his colleague Fernando. It was interesting to hear their experiences from their visit to Bangalore, India.

Andy and Nicholas who lived in the same place where I stayed in Tucuman helped me to organise a talk at the department of bioquimica, quimica and farmacia at Universidad Nacional de Tucuman where one of the questions was my thoughts on Argentina. My response was received with chuckles and laughters. I said, ‘Argentina is like Southern Europe, Italian pizza and coffee, Spanish siesta and a Greek economy – life in Argentina is laid back and very relaxing’. In Catamarca my hosts Mica and Max organised a talk to the English learners at the Universidad Nacional de Catamarca where my talk seemed to have stroked the emotions of some of my audiences.And Mati, my host in La Rioja helped me to organise a talk at one of the private schools and also for the tourism students at Universidad Nacional La Rioja. 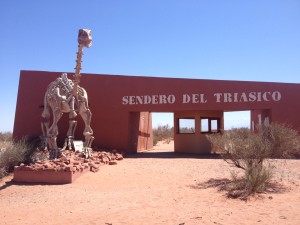 They were real once 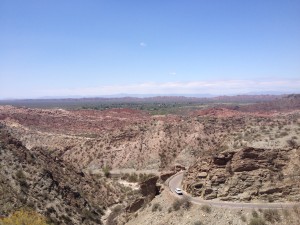 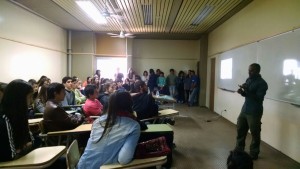 In San Juan my host Facu was instrumental in organising several talks. I spoke on two different days at his University to the students of chemical engineering, food engineering and industrial engineering. The reception was some of the fantastic. In addition to questions about my travel, I had several interesting questions and it was an excellent opportunity to discuss some of my experiences of life in the UK in general. My audiences have widened beyond schools and universities. I spoke at a non-profit organisation and also to a group of local businessmen in San Juan.Through my hosts and all these talks I made lots of friends and plenty of discussions about India, UK and Argentina. Bicycle travel seems to be one of the best way to know a country.