Thanks to Samrat’s visit, I enjoyed four star accommodation and drove around Hollywood and Los Angeles hills for two days. Samrat, who lives in Chicago currently, and I have been friends for 16 years although this is the second time I am saw him in the last 14 years. After our studies in Mumbai we both left India and went different directions but our latest meeting felt like the intervening years hadn’t happened at all. This was a big distraction from my bicycle tour. 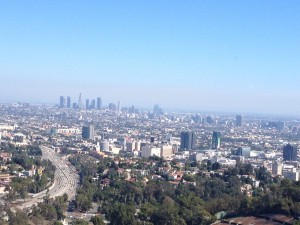 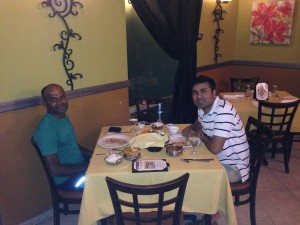 Time for some Indian meal with Samrat

There were several towns between Los Angeles and San Diego and mostly flat roads. This stretch of California is noticeably wealthy. I felt a bit out of place being on a bicycle with trailer and tent. I camped for a night at Doheny Beach State Park which had a hiker/biker site between the toilet and railway track – so considerate of them! Their attitude towards bicycle tourist at the kiosk was no better. Caravans and those in the car were given priority and even a smile. Meanwhile I was asked to move over to the side and interrogated to check my identity. Apparently the hiker biker camp sites is popular among homeless and the park has a rule to not permit any person for more than a total of two weeks over a period of twelve months. They had to make sure that I am not one of them. At the very least they could have done this a bit more politely. Equality in front of law is in the american constitution but equal attitude towards all is not it seems. 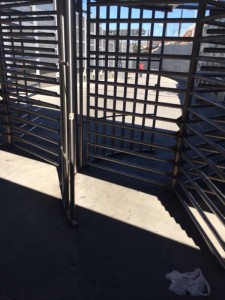 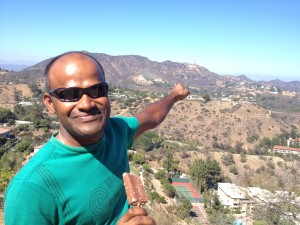 I stayed in San Diego for three nights to collect some more gear for my bike since it will be difficult to get spare parts for my bike once I leave the USA. I met Eugene on my way to San Diego who was also heading to Mexico. My San Diego Warmshowers host Johan rode Eugene and I to the border. At the border, the turn-wheel for pedestrians is not cyclists friendly (check the picture). I had to undo my trailer and get everything across in one go! It’s a highly secure one-way area. Luckily Eugene was there to help me. Visa process was not straight forward either. But the lady at the pedestrians crossing was helpful, she took us to the motor vehicle crossing point where we could pay and get the tourist visa straight away. From there we cycled towards Rosarito. The language, new culture and a very different infrastructure to the one I was in for the last few weeks and friendly people, gave me that lovely travelling feeling. 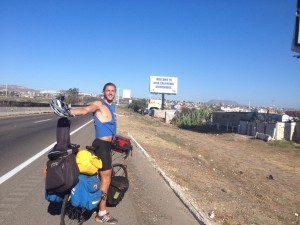 Entering Baja in Mexico – Eugene in his signature pose

I will be cycling in The Baja Peninsula in Mexico for the next three weeks after which I will cross into mainland Mexico. I am going to need plenty of water to cope with the desert conditions here. I plan to buy some more water bottles tomorrow!