Many thanks to Mik from Warmshowers who let me stay in his apartment for a week in San Francisco when he was away for work. I was so pleased that he trusted me and allowed me to stay in his apartment in his absence. I am also grateful for the lovely south indian meal by Guna and his family. I enjoyed meeting them and their friends. My taste buds were treated with unlimited amount of traditional food notably masal vadai, rasam and kuttu. I also went to the Tamil music concert called Saral in San Francisco where I met several Tamil folks. I haven’t been to a Tamil music concert for more than 15 years, I felt like I visited Tamil Nadu for few hours. Many thanks to the Bay Area Tamil Mandram for giving me this opportunity. 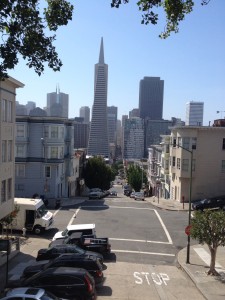 Los Angeles was approximately 500 miles away and I had 12 days to get there; It felt good to have more time than needed. There was a world of difference between Northern California and Southern California in terms of cycling. The scenery was great; the whale watching tourist in every corner of the hills watched me gritting my teeth to climb up the steep hills. Unlike them, I did not have to stop to watch the whales I saw plenty of these and other sea creatures from my saddle while riding. 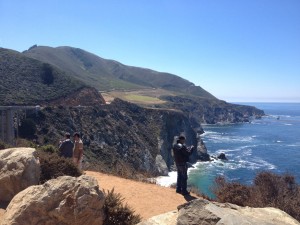 The cliffs and the undulating road 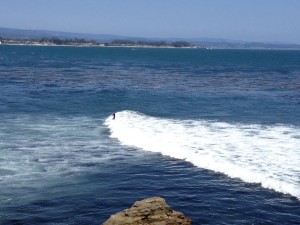 Certainly it’s holiday season, every campground was full of families with kids. All these are tolerable but the ‘promotorist’ attitude was not (promotorist – people who assume motor cars have the right of way). There were plenty of campgrounds along the coast and they varied greatly in terms of what they offered. Some of them had everything (hot shower, flush toilet, drinking water) like those in Oregon, but others were nothing more than a parking lot. In campgrounds that were right in the centre of the city like Veteran memorial park in Monterey the hiker/biker sites was used by some people who were neither hikers nor cyclists. I would not recommend taking kids to these campgrounds. On top of this some campgrounds like, Kirkcreek campground and Gaviota state park had no water at all, not even drinking water. However, the camp store had water to sell, 3 USD for a litre (seriously?). 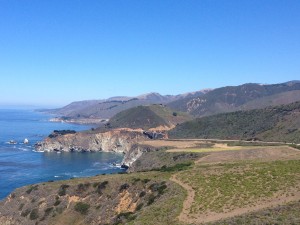 What will happen if I drop my iPhone? I was about to find out. To make it a bit more exciting I dropped it on the highway, my heartbeat must have been twice the normal to watch the cars racing past it but not run over it. I managed to grab it before it went in to pieces. What a miracle, it was working when I turned it on. Later on, I realised that the microphone took the hit. Murphy’s law says all bad things happen on the same day. From google map I assumed the shops were nearby the Veteran Memorial state park campsite in Monterey since it was right in the middle of the city, only to find out later that they are on the other side of the hill! This day was the first day in this trip I felt very frustrated, tired of planning the routes, shopping for food everyday and the phone problem on top of this. 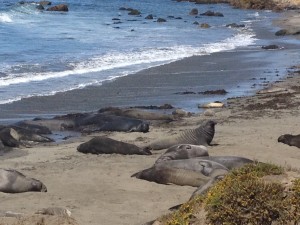 I read somewhere that a good sleep generally resolves most problems during touring. The next day I spent two hours in a coffee shop looking at various solutions for my phone problem. I took the engineering approach to line up few solutions ranging from restarting the phone to buying a new phone and I started feeling good, after all problem solving is part of every day life. 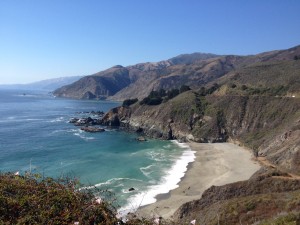 From Monterey I cycled to Lucia about 65 miles. One of the beautiful days, lovely scenery and weather. How coincidental, on this glorious day, I was also interviewed by a Norwegian TV channel for their travel programme, to be broadcasted in October. They asked me lots of questions about my bike trip. I rambled on for some because I was not prepared, I just spoke what came to my mind. A warm-shower was due at the end of the day to wash off the sweat but Kirkcreek campground did not have water although the host was ready to sell bottled water at 5 USD for a gallon. I was not willing pay so I decided to cycle 5 more miles to the next campground. Plaster creek campground had running water but no hot showers. It is for occasions like this I travel with the 20litres foldable kitchen sink. I ended the day with a nice potato curry and rice.

The following day I left to Morro bay about 63 miles away. I had a rest day at the Morro bay campsite, a lovely campsite in the edge of the town. The MSR universal stove is capable of using any type of fuel with an appropriate adapter for each type. I ran out of camping gas for my stove so I decided to try out liquid fuel to get some practice using this type of fuel. Little I knew that I am setting myself for a chemistry experiment. I bought torch fuel from the grocery store which was made up of a mixture of hydrocarbons, mostly longer chain ones I presume. The heat energy from the torch fuel was only a side product. It produced more soot than heat and every attempt to get a blue flame on my stove was futile. I spent at least 45 minutes to clean up everything. The first thing I did on the next day was to find an outdoor shop to get a gas canister and vowed not to use unconventional fuels; experiments are best done in laboratories.

Dan G from iGeeks shop in Santa Barbara fixed my phone in less than 20 minutes. It was a big relief to have my phone working again and to celebrate this I had a big Mexican meal that evening – occasional indulgence is acceptable in cycle touring. The highway 1 finally brought me to Los Angeles yesterday (20th August).  The weather here is fabulous, lovely flat roads and brilliant bike lanes, I am loving this place (Santa Monica to be precise). 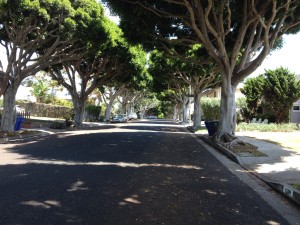 I hit the 5000 kilometres mark yesterday! The last two weeks have been bit more eventful than I expected, a variety of new experiences and several lessons learnt. I am almost at the end of the USA chapter of my tour, just over a 100 miles left to the border. What’s on the other side?