Exploring the south of Mexico – Riding with a broken back 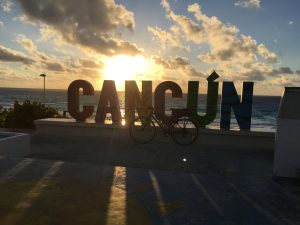 What’s life without at least one bicycle touring per year? With the ‘beast from the east’ making frequent visits to the British Isles the east coast of North America was the safe bet for some stable and warm weather over Easter holidays.  Florida lost out due to the flight cost and Cancun won. The connecting flight from Chicago to Cancun was full of teenage spring break travellers – all very happy (read loud and noisy). 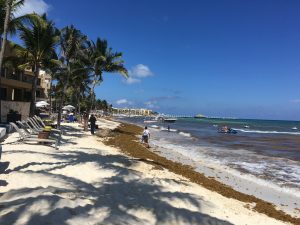 I had to ditch the idea of taking my bicycle due to some practical reasons and instead decided to hire a bicycle from Cancun. Given that the average temperature was 25 plus (degree Celcius) through out my time warm gear was unnecessary and even the rain gear was redundant – a light weight luxurious bike touring with no tent, nor sleeping bag. 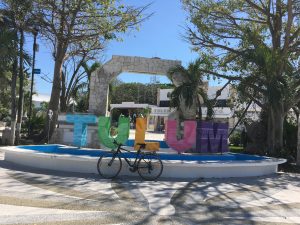 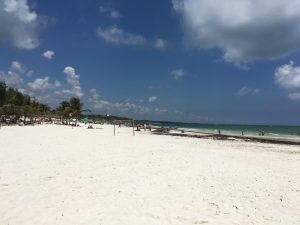 One of the pristine beaches at Tulum

I had originally planned to cycle to Palenque ( 1200km) over 10 days. This would have been a hectic ride in the scorching sun instead a more chilled Mayan Meanders ensued.

I had done no research on this area prior to my arrival and assumed Cancun was just a beach destination. I was quite wrong. This peninsula had lot more to offer. If anything, the signposts on the highway was a clear indication of the diverse attractions on offer: jungle resorts, beaches, theme parks, Cenotes and of course the numerous  Mayan ruins. Cenote is the name given for a natural hole in the ground, like a sinkhole. This region had numerous Cenotes resulting from the collapse of limestone bedrock. The water in the Cenotes offer an excellent place to cool down and some fabulous chilling out. 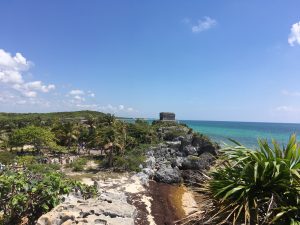 The view from Tulum ruins

On the first day I left at 6am when it was still dark and took a detour to visit the Zona Hoteleria just outside Cancun – a narrow strip of land in the sea full of hotels. It was a coincidence that I arrived at one of the famous beaches for sun rise! With just one coffee and a yoghurt from Starbucks I made it to playa del Carmen in just under 4 hours arriving at 10am. This place was heaving with tourists after all the beach was just 2 mins walk from the town centre. 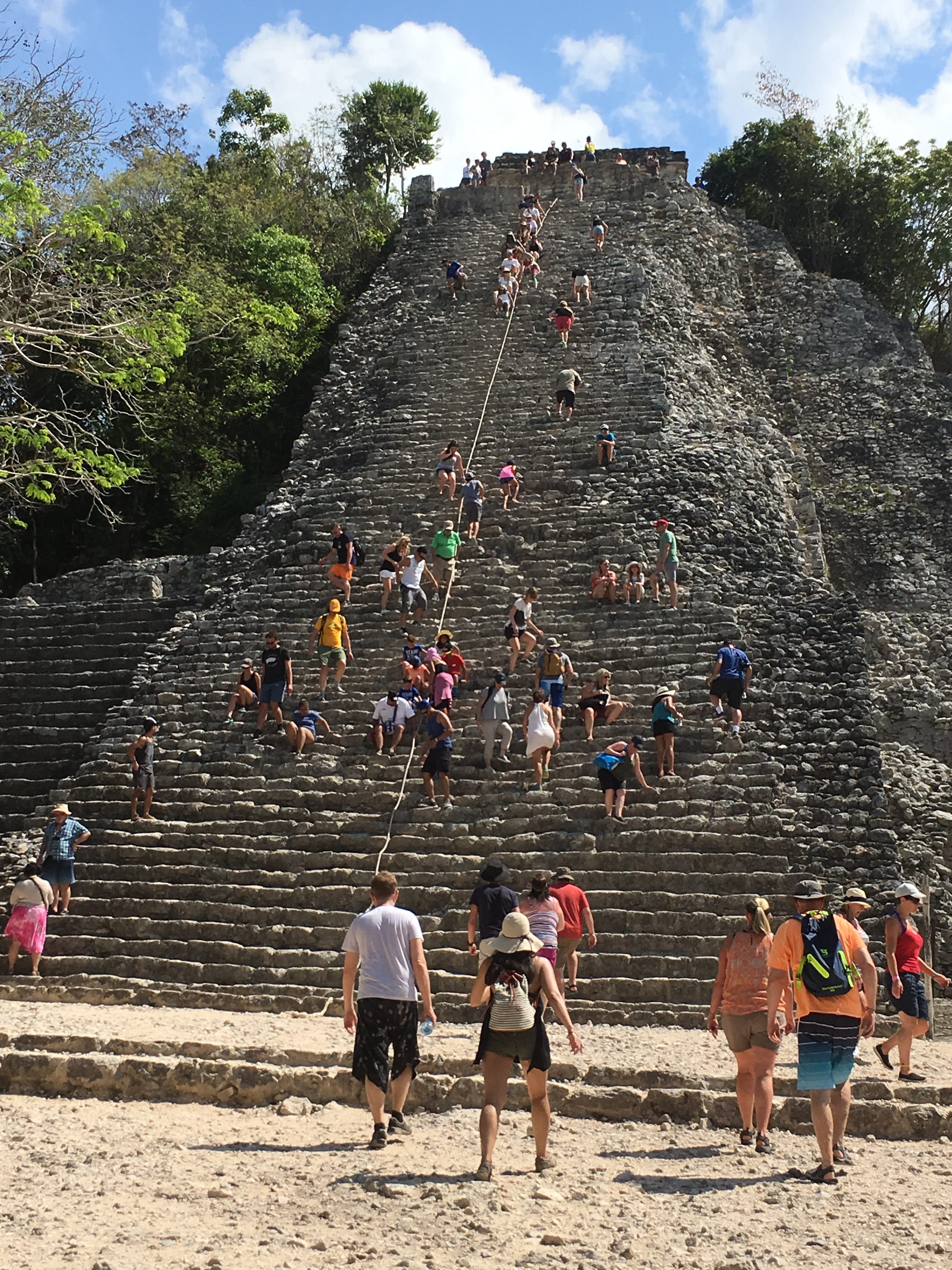 The pyramid at Coba ruins 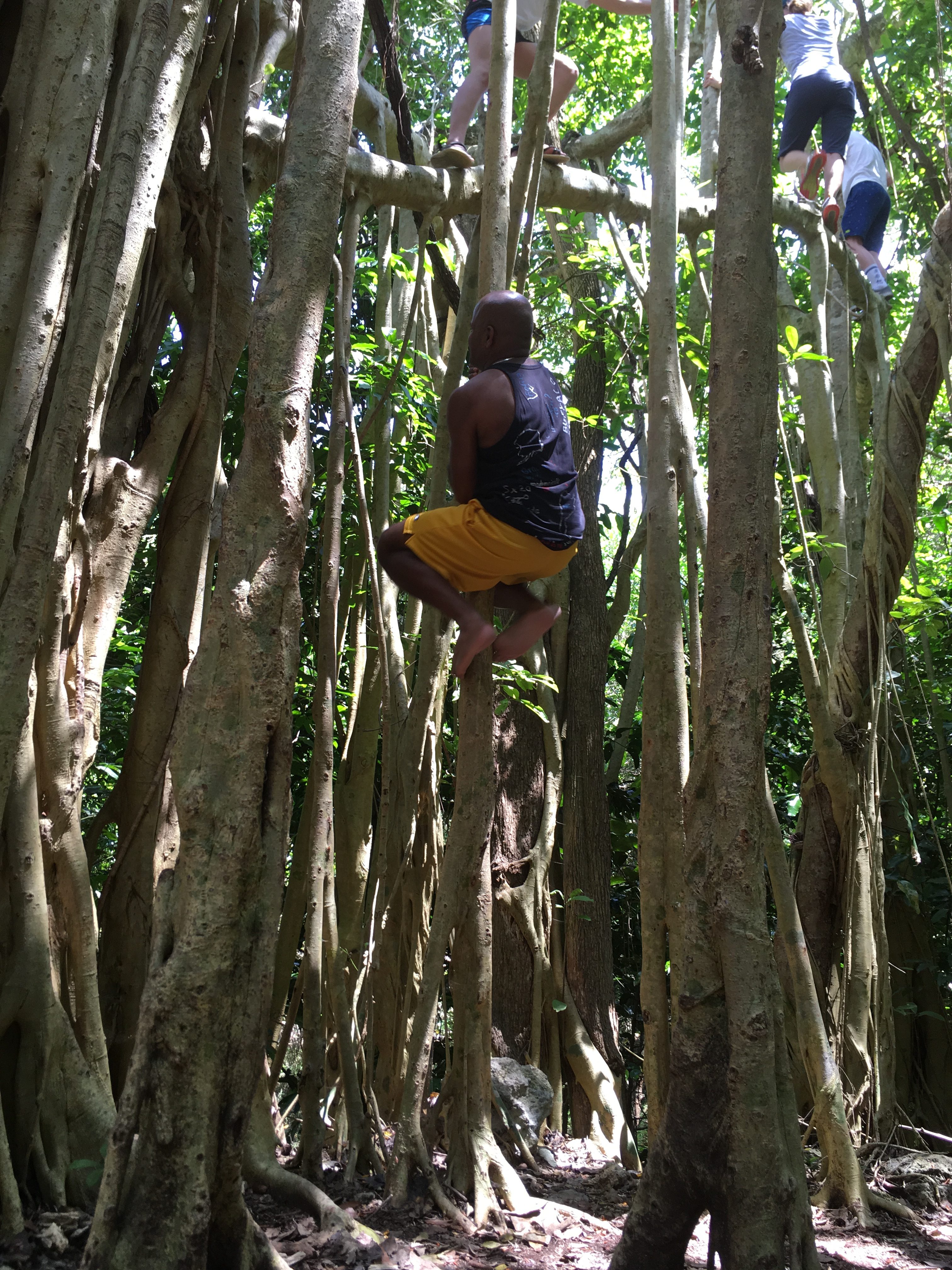 Some ‘trad’ climbing at Coba Ruins

The second day of ride was to Tulum, just 61 kilometres away – an early morning two hours ride. At Tulum I went to see the ruins and decided to do some snorkelling which was on the list of things to do but I never had the courage. It was an adventure worth it. The water was warm the various shades of bluish green water was fabulous. Nevertheless, I lost the breathing tube within the first five minutes and panic set in. My guide and his assistant couldn’t hide their amusement but was kind enough to throw a rubber tube into the water which I held on to for the next 30 minutes. I dipped my head in every time my guide pointed out a turtle or some lovely coral reef. Next time when some one mentions snorkelling I know what it means.

From Tulum I went inland, another two hours early morning ride to Coba just 47 kilometres away. Tourists get bussed in to this ruins and early mornings are the best to beat the crowd. Cyclists think alike. I met a german cyclist at the entrance of this park who had cycled in from opposite direction. This site was quite big and a private company rented out bicycles for use within the park. Outside bicycles were not allowed. I tried my best but they wouldn’t budge. So we both decided to take a walk. This site had a massive and steep pyramid where people were allowed to climb up. The view of the jungle from the top of the pyramid was excellent. This pyramid must have been quite a task to build without cranes. The site of ruins was in a wooded area making the walk a pleasant one. We met a family of four from Utah who decided to climb one of the banyan trees. The kids were astonished to see the aerial roots. It was fun to scale this tree in the ‘traditional’ manner. It turned out the parents were also Chemistry teachers. 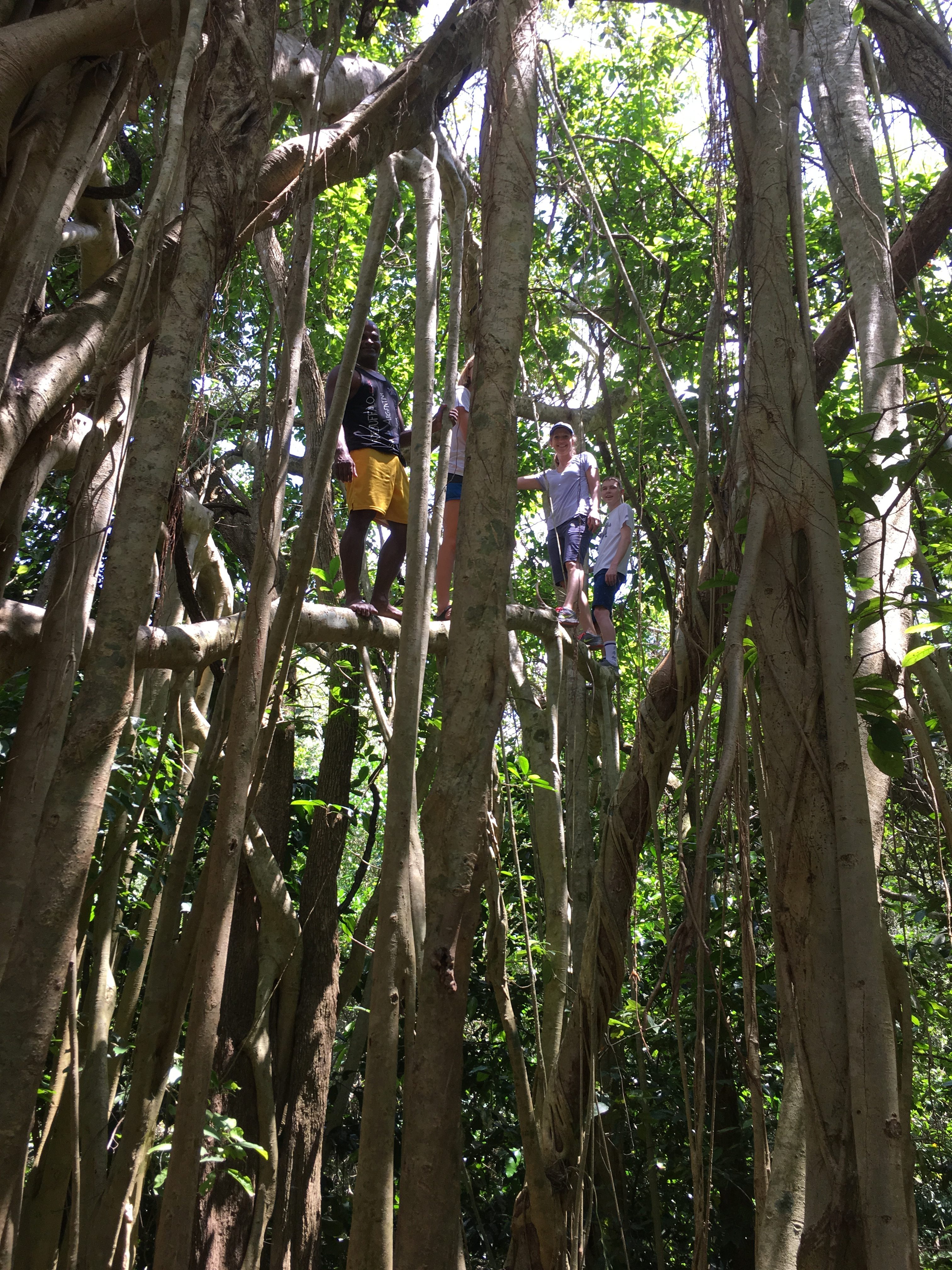 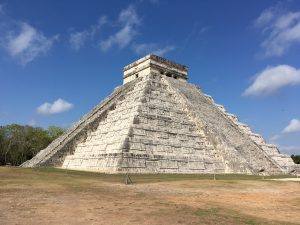 The out of bounds pyramid at Chichen Itza 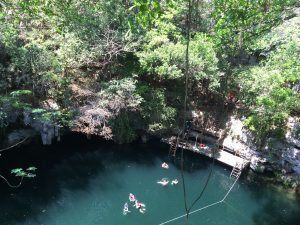 Next stop was Valladolid which was the nearest city to the famous Chichen Itza ruins. I was at the ruins at 8am the next day to avoid both tourists and the heat. There were plenty of structures standing intact from the Mayan time but unfortunately the pyramid was off limits for climbing. These structures were grand. After visiting the ruins, as planned, I arrived at the Cenote Yokdzonot which was recommended to me by the guys at the bicycle shop. I went into the water without much fear this time since life jackets were compulsory and also this felt safer than an open ocean. The water was crystal clear and cooler with some beautiful limestone rock formations. Because I stayed there overnight I had the privilege of going into the water once again after lunch. Life felt good in the water there. From the Cenote another early morning long ride took me to Merida, about 102 km – the longest ride of this trip. From Merida I took the bus back to Cancun where this trip ended. 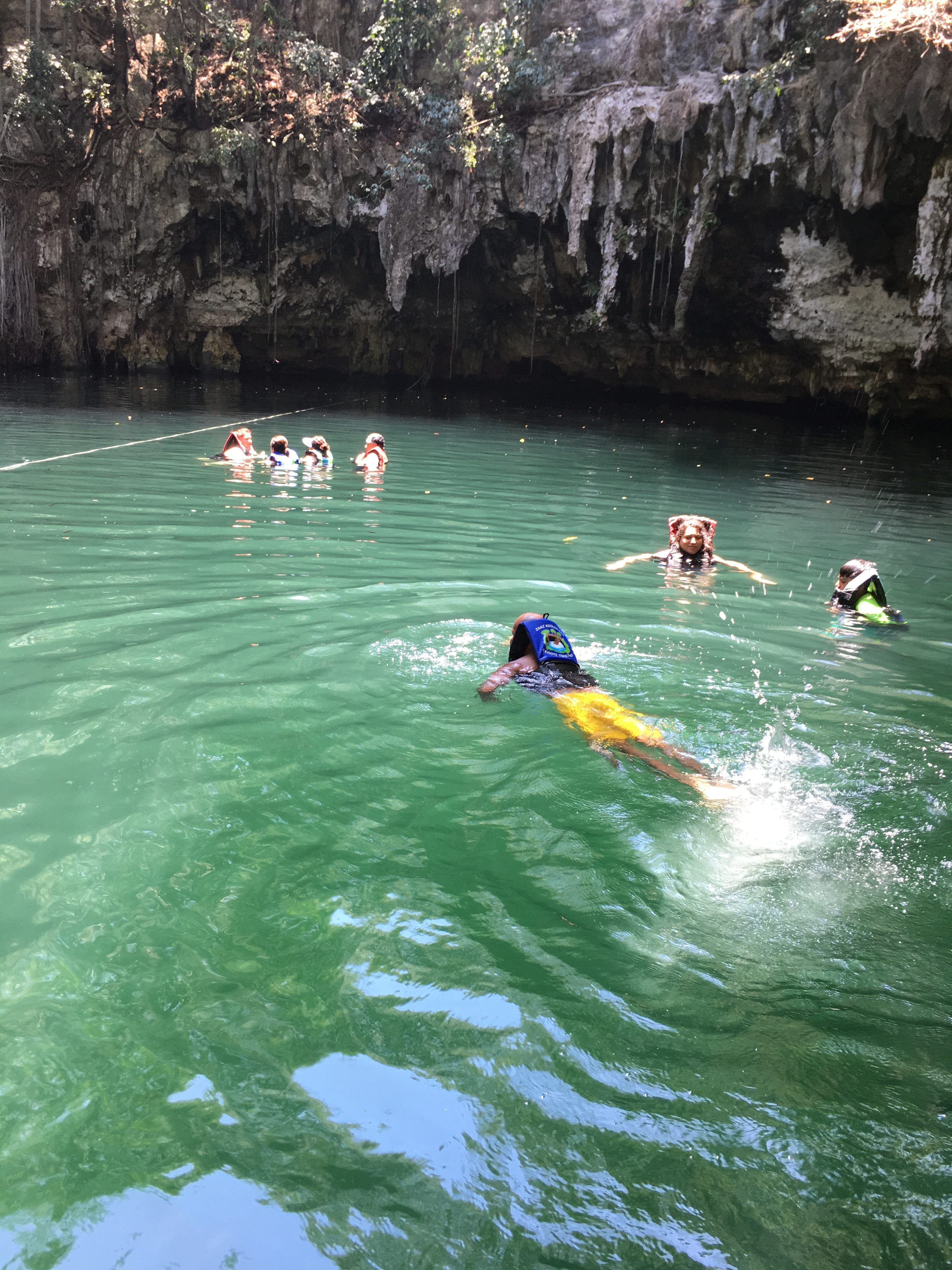 life is safe with a life jacket!

For those who wish to rent a bicycle I highly recommend the bicycle shop ‘Elite Cyclery’ at Cancun who had a wide range of bikes of all sizes and types available for rent (Disclaimer –  I was not paid to write this!).